I know you received this a few hours ago. But I discovered there was no sound to the first one. Sorry about that.

This is the final product of the project I’ve been sharing with you since the beginning of December. I hope it blessed you. I sure enjoyed creating it. It now hangs in my mother’s living room. She was delighted to receive it for her 87th birthday.

The hope of victory over the curse of sin began centuries before King David sat on the throne. God had made a promise to Adam and Eve that a son would be born who would take away that curse, which sentenced them and everyone after them to hard labor. Decades later, Lamech, at the age of 182, prove his faith in the promise when he named his son Noah and said, “He will comfort us in the labor and painful toil of our hands caused by the ground the Lord has cursed” (Genesis 5:28-29 NIV). This took place generations before God called out a nation unto Himself from Abraham’s seed.

Through the ages, the Hebrews failed, were enslaved, and freed many times; but they held onto the hope of Israel—a messiah would come to save them and to rule the nations.

Jesus was that Man. However, God’s plan of victory differed from that of the Jews.

We are now on the other side of the cross looking back in awe with gratitude and looking forward to His second coming. Then He will return on that white warhorse as the conquering King the Jews anticipated. His army of saints will follow Him to war and celebrate the victory over the fall of the enemy—Satan.

How about you? Are you enjoying the victory that overcomes the world through faith in Jesus Christ?

Next time, we’ll review The Gift via another time-lapse art video that brings the whole subject together. Prepare by studying Romans 6:19-23.

The Lord is not slow in keeping his promise, as some understand slowness. Instead he is patient with you, not wanting anyone to perish, but everyone to come to repentance. (2 Peter 3:9)

My father was a man of integrity. If I learned anything from him, I learned to never make a promise I couldn’t keep. He made few promises. But when he did, Daddy stood by his word. As intent as he was at not making promises to his family he couldn’t keep, he was even more concerned with making vows before God. Daddy understood the displeasure God takes in unfulfilled vows and thought it better not to make vows than to break them. My dad was a simple man and took Jesus’ words to heart:

“Again, you have heard that it was said to the people long ago, ‘Do not break your oath, but fulfill to the Lord the vows you have made.’ But I tell you, do not swear an oath at all …  All you need to say is simply ‘Yes’ or ‘No’; anything beyond this comes from the evil one (Matthew 5:33-37).

Because of Daddy’s integrity, I trusted his word. When he said he’d do something, I knew he’d make every effort to do it. Although I don’t remember him breaking a promise, I’m sure he did. He wasn’t infallible. Perhaps the essence of his promises came with these words, “I’ll do what I can.”

On the other hand, my heavenly Father never says, “I’ll do what I can.”

Next time, we’ll look at the gift of victory via the video, which shows the completed picture I’ve been developing since the beginning of December. Prepare by studying 1 John 5:1-12.

“Come to me, all you who are weary and burdened, and I will give you rest. Take my yoke upon you and learn from me, for I am gentle and humble in heart, and you will find rest for your souls.” (Matthew 11:28-29) 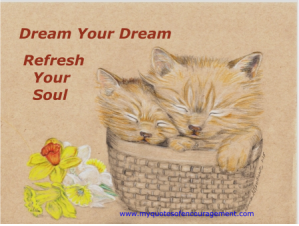 I remind myself of two of my great-aunts who were talking on the phone until one no longer answered the other. This caused a rift between the sisters. Apparently the one who continued the conversation thought the other one had hung up on her. The problem resolved itself, however, when the talker went to her sister’s home to give her a piece of her mind face-to-face and found her sister fast asleep still clutching the phone. True story. No kidding.

Obviously my ability to fall asleep during inopportune times is inherited. But I’m still perplexed by it, especially when I think about sleeping over one-third of my life away. It seems like such a waste of precious time. And I’ve become more painfully aware of the precious, fleeting minutes of my life the older I get.

Yet, God, in His infinite wisdom, programmed us to need rest.

Next time, we look at the gift of promise. In preparation, please read and think about 2 Peter chapter 3.

Peace I leave with you; my peace I give you. I do not give to you as the world gives. Do not let your hearts be troubled and do not be afraid. (John 14:27) 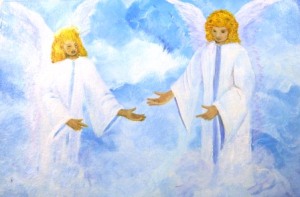 Although Christmas is almost a month past, the song “I Heard the Bells on Christmas Day” rings in my ears. It could be because I’m unwilling to let go of my advent topics. Nevertheless, that song pricks my heart with its lyrics of peace on earth. When I hear news reports of child abuse, armed robberies, and mass murders, I want to cry out, with the poet Henry Wadsworth Longfellow (1807-1882),

And in despair I bowed my head;

“There is no peace on earth,” I said;

“For hate is strong,

And mocks the song

Of peace on earth, good-will to men!”

Before writing this post, I took the time to read the story behind the poem …

Next time we’ll examine the gift of rest. In preparation, please read and meditate on Matthew 11:28-29.